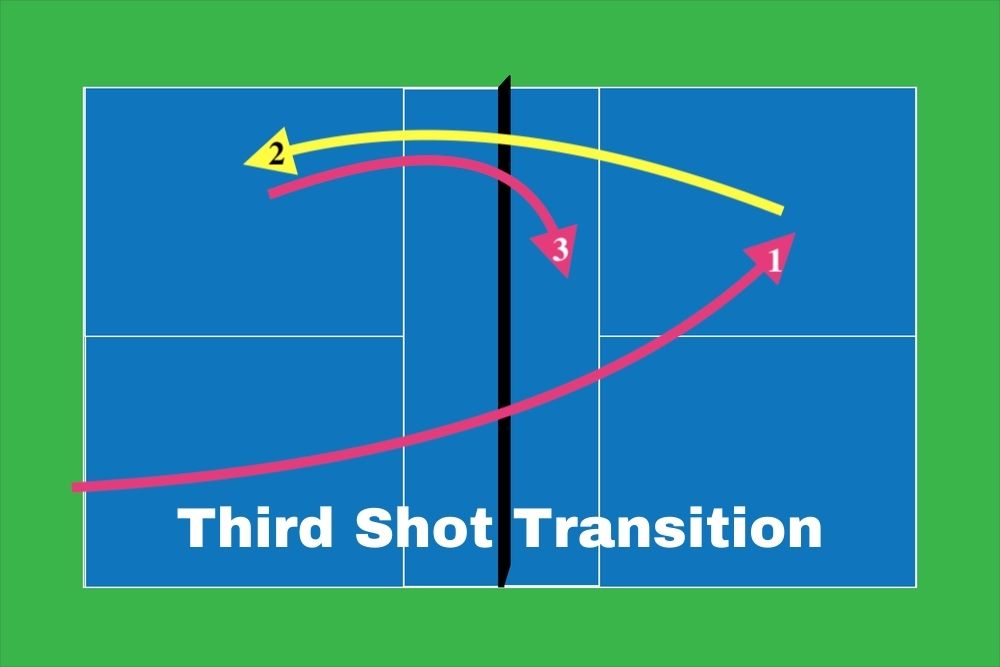 The Transition Shot:  Drop vs. Bang

The 3rd shot, aka the transition shot, gives your team the opportunity to advance to the non-volley zone.  The “transition” is from the baseline to the net (aka non-volley zone) where the majority of the game is played out, especially as your game improves.  Don’t believe me?  Watch what part of the court is most used to play out their points.

Similar to an approach shot in tennis, the 3rd shot gives you the chance to get up to the net (NVZ in pickleball lingo).

There are two competing choices for hitting the transition shot; a drop or a drive. There is no clear consensus if a drop or drive is better, but if executed properly, the result is the same – to give you and your teammate a chance to get to the non-volley zone.

The 3rd shot transition shot, however, is the hardest shot in the game.

What is the 3rd Shot?

There are really 4 shots or 4 stages of a pickleball point.

The first shot of each point is the serve.

The second shot is the return of serve.

Remember the two bounce rule:  the fist shot (the serve) and the second shot (the return) must bounce before a player may strike the ball.  Hence, the 2nd shot, the return of serve, allows the non-serving team to approach the NVZ first, the 3rd shot is the serving teams first chance to get to the NVZ.

The traditional “3rd Shot Drop” is a defensive shot usually hit from the baseline.  Properly executed, the pinnacle/apex of the shot should be on your side of the net, yet have ample clearance of the net to land in your opponents NVZ.

Hit too high, the ball will bounce higher off the court (ball rises above the height of the net) and give your opponents a putaway.  Hit too low, the ball doesn’t make it across the net.

But if hit “just right,” the ball lands in your opponent’s NVZ but only bounces enough to stay below the top of the net.  This forces your opponents to return your drop with a dink…the only shot they have.

Beginners, tennis converts and bangers tend to drive or “bang” the ball.  It’s basically tennis on a short court, but it can achieve the same goal as a well placed 3rd shot drop.  For beginners, It’s an easier shot to hit than a 3rd shot drop.

Driving the ball does NOT mean hitting as hard as you can.  A drive is executed by driving through the ball producing a shot that has minimal clearance of the net and stays low.

The object of the drive is to make your opponent hit a tough volley (hopefully into the net) or even create a passing shot.

Lower “line drives” are harder to volley and require anticipation, quick hands and solid stance.  Most beginners and improvers have a difficult time volleying on a consistent basis.

The result is a volley that lands short on your side, giving you and your teammate the chance to approach the NVZ.

As a traditional tennis player, it took me a good 6 months playing 2-3 times/week to start looking to drop or dink the 3rd shot.  When I teach, I warn the tennis players this is a huge obstacle to overcome, that is, instead of hitting every ball hard…look to hit a 3rd shot drop.  It’s much harder to implement than you think, but is necessary for you to improve your pickleball game.

When you are watching others play, you can gauge their “experience” by the frequency of 3rd shot drops and dinks that occur.

Keep your game “Below the Net,”

Is Your Pickleball Serve a Weapon?