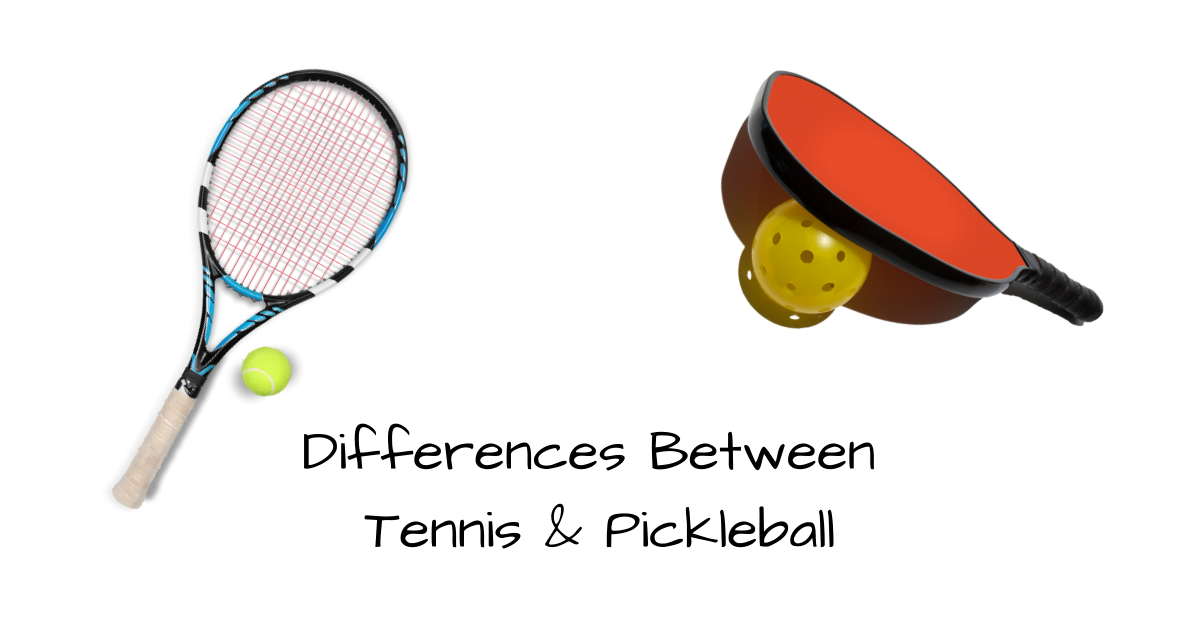 Differences Between Pickleball and Tennis

Differences Between Pickleball vs Tennis

You might have heard the words “pickle” and “kitchen,” but “pickleball” is really more of interest to athletes than to foodies. So, what exactly is pickleball?

There are certain comparisons between pickleball and tennis, but these two sports are far from identical. This becomes obvious when you compare the visuals as well as the resulting different techniques to control the ball.

The general look of tennis balls and tennis racquets is relatively well-known, even among people that are only vaguely interested in sports. However, even sports fans and tennis players might be unfamiliar with the sight of pickleballs and pickleball paddles.

While tennis balls have a bouncy rubber core, pickleballs are basically hollow plastic shells with holes on their surface. The holes in pickleballs for outdoor use are smaller than those for indoors, and both bounce comparatively low.

In contrast to the rounded, stringed tennis racquets with their long handles, pickleball paddles are more rectangular in shape, with a hard surface and shorter handle, and as such only half as long.

Another significant difference between both ball games is the size of the court: A pickleball court is much smaller (20′ x 44′).than a tennis court, more like a badminton court, where pickleball was originally invented. The net, accordingly, is smaller than its cousin on the tennis court.

Another aspect that differentiates pickleball from tennis is its own set of rules. You can find out more about the rules for pickleball on the website of the International Federation of Pickleball (IFP).

Although this is not technically a rule, pickleball is usually played as a double. However, i.e. with four people, there is an option for singles.

So, What About The “Kitchen”?

A piece of rather unique terminology is the pickleball “kitchen.” This, of course, has nothing to do with cooking food! The origin and reason for using this expression in the context of pickleball is rather unclear, but a definition of this particular kitchen is easier: It is the name for the area on the pickleball court that is also called the “non-volley zone.” This means that while a player stands within the kitchen, they cannot simply volley their shots over the net. This kitchen rule is an important characteristic that distinguishes pickleball from tennis or other comparative ball sports.

Tennis vs. Pickleball | The Better Workout

Line Calls in Pickleball | In or Out?

Sorry, the comment form is closed at this time.